The legend of the Golem—a man made from clay brought to life through kabbalistic magic in 16th century Prague by the actual historical rabbi Jehuda Loew to protect the Jewish community from pogroms—is one of the most enduring and resonant stories in all of Jewish mythology.

The 1920 silent film "THE GOLEM, How He Came Into the World", directed by Paul Wegener and Carl Boese, is considered the definitive version of this amazing tale.

Legendary guitarist GARY LUCAS, whom The New Yorker magazine described as "The Thinking Man's Guitar Hero", was inexorably drawn to this tale...and this film.

A profound love of Jewish myth, horror films, and science fiction themes brought Gary Lucas to "The Golem"—and it has proven to be a match made in heaven.

His original solo guitar score for "The Golem" is considered a classic—a seamless blend of innovative music and fantastic cinema which has been delighting and thrilling audiences in sold out theaters and festivals around the world since he debuted his score in 1989 with co-composer keyboardist Walter Horn at the BAM Next Wave Festival.

Since then Gary has gone on to accompany the film with a solo guitar version of his score in over 20 countries around the world—performing the work at London's Royal Festival Hall, opening the New York Jewish Film Festival at Lincoln Center, starring at the Venice Biennale, opening the Australian Jewish Film Festival in Sydney and Melbourne, playing with the film in Moscow, St. Petersburg, Amsterdam, Berlin, Florence, Budapest, Toronto, St. Louis, Miami, Tel Aviv, Vienna, Krakow—and of course in Prague, home of The Golem.

"The Golem" is a superb example of the early German Expressionist silent horror cinema at its finest, and went on to profoundly influence such Hollywood horror films as James Whale's "Frankenstein" (1931).

Gary Lucas, whom Rolling Stone calls "one of the best and most original guitarists in America", has been wowing international audiences for years with his many musical projects—and none more so than his live score accompanying "The Golem".

Gary's last gig before lockdown on March 4th, 2020 accompanying the silent expressionist horror classic "The Golem" at the Cornell Cinema at Cornell University in Ithaca received this appreciative review:

"Gary Lucas' stunning score for 'The Golem' at Cornell was the highlight of our public programs this year. The music amplifies the power of this tale and the expressionist set to create an unforgettable evening of cinema—one that, far from being dated, almost seems prophetic."
—Jonathan Boyarin
Paul and Bertha Hendrix Director of Jewish Studies
Diann G. and Thomas A. Mann Professor of Modern Jewish Studies
Cornell University

Video clip from "The Golem" with Gary Lucas' solo guitar score on the soundtrack:

CHECK OUT RAVES FOR GARY'S GOLEM SCORE FROM AROUND THE WORLD:

"Weaving together themes that range from eerie to folksy, ominous to psychedelic, with a sprinkling of motifs from Jewish music mixed in, masterful guitarist Gary Lucas works his magic in a unique score for Paul Wegener’s German expressionist classic, The Golem. Performing on an electric and acoustic guitar, along with effects pedals, he conjures unexpected sensations and surprising empathies. After the show, he offers a great talk-back about both his score and the film."
—Mary Fessenden, Director, Cornell Cinema

"I just saw the legendary Gary Lucas (of Captain Beefheart) perform his score to the silent film The Golem. Oscillating between electric guitar and acoustic and with the aid of a bunch of pedals, he captivates musically the story of the clay monster made by a Rabbi in Prague which will save humanity. Boy do we need a friendly monster these days! The performance feels intimate and at the same time produces vast soundscapes which sweep across the stage. I was blown away. This is something not to be missed."
—Trevor Pinch - author of Analog Days: The Invention and Impact of the Moog Synthesizer

"Gary Lucas' live score accompanying 'The Golem' is a total treat, a virtuoso performance on guitars that adds meaning and depth to this silent film classic. Don't miss this unique opportunity to see a great guitarist providing the soundtrack to a great movie!"
—Gerald R. Beasley
Carl A. Kroch University Librarian
Cornell University

"Gary Lucas's project with the Golem is one of the best combinations of live music with a silent film I've ever seen. But beyond it being a powerful performance of mixing a classic old media with fresh new music, Gary's guitar work expresses beautifully the deep and soulful characters in the film. He brings this historic story to life and makes the 90 minutes a very powerful and compelling performance piece."
—Michael Dorf, Founder of the Knitting Factory and artistic director of the Oyhoo Festival

"Absolutely mind blowing, as only a genius like Gary Lucas can do."
—Frank London, Founder of the Klezmatics and a major force in new Jewish music

"Gary Lucas mounted a special screening of The Golem at Rubin Museum of Art's CabaretCinema series on February 10, 2006 as part of an inaugural month of the museum’s new Friday night experience, the K2 Lounge. Not only was it a sell-out event, but Gary channeled all the mystical, raw emotion of the film into a score that both matched and transcended its inspiration."
—Tim McHenry, Producer, Rubin Museum of Art

"Gary Lucas's live score to the classic film 'Golem' was truly amazing. One quickly forgot that it was just one man on stage as the range of sounds, music and styles that came from Gary and his guitars was oh so much more then one man could honestly provide.
I had the pleasure of presenting The Golem twice, at the Mahaiwe Prerforming Arts Center in Great Barrington MA. and MASS MoCA in North Adams, MA. I look forward to finding the next venue and opportunity to present it once again."
—Jonathan D. Secor, Director of Special Programs, Massachusetts College of Liberal Arts

Gary Lucas Plays "The Golem" a Top Pick at Canadian Music Week in the Toronto Globe and Mail on 3/6/08.

interview with Gary in The Times of Israel about performing "The Golem" at The Metrograph NYC!

Gary Lucas plays "The Golem" at the BimHuis, Amsterdam
photo by Arjen Veldt 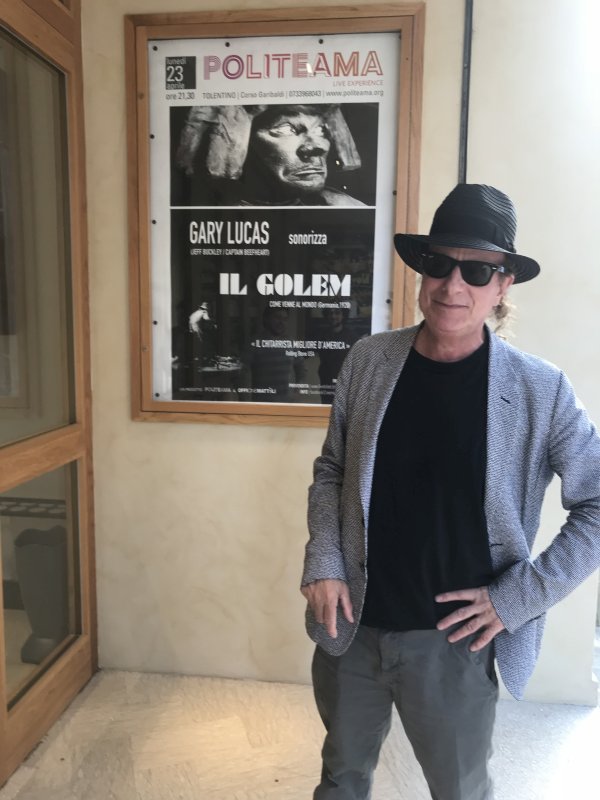