LE BEAST CONCRÈTE with producer David Sisko gets a nice review in the latest issue of UNCUT (UK)!

Gary Lucas's latest project, NYC's Le Beast Concrète, represents the combined talents of guitar legend Lucas and multi-genre Producer David Sisko ("Sisko"). Together they have created a completely new-sounding body of work that mixes Gary's guitar (both from studio & field recording) and Sisko's electronics, synthesis & beats. By combining the elements of the past, present and the near future, it can be considered a "genre-fluid" mix blues, rock, dance, trap & the avant-garde—like none other before.

"Realize It" is the hard-hitting first single from their full-length album "Gargoyle" (released Wed. August 11th, 2021) which features a vocal sample from Lil Woozy auto-tune chanting: "There's no wrong or right. And realize it". These lyrics are a symbol of our times when we are all inundated with morally & ethically ambiguous messages from the Mass Media—admitting this reality is the first step towards processing and moving forward—hence "Realize It!". The single combines Gary's signature guitar riffs & lines with Sisko's deep trap 808's and relentless dance floor rhythms—all building to a cacophonous climax. It is a multi-Spotify-playlist add.

DAVID SISKO is a New York City based, multi-genre, International Pop Music Producer, Remixer & Mixer. He is one-half of the songwriting/recording artist Disco Pusher. He has remixed best-selling artists, released electronic & experimental records and has co-written & produced numerous songs of various musical styles on major, indie & self-released labels. His original songs, compositions, sound design and production / engineering skills have appeared in feature films, documentaries, television programs, commercials and video games across the globe. He holds a Masters of Music Technology degree from New York University with a focus on Artificial Intelligence, Voice Recognition & the Tonemeister Recording curriculum. He is the founder and owner of Arena 01—an independent record label in New York City. https://linktr.ee/davidsisko

FROM NTB NEWS SERVICE (NORWAY):
Lucas celebrates 40 years of music with new Sisko collaboration
The American Lucas is known as a good companion, among others for the late Jeff Buckley and Captain Beefheart.
These days, timed for his 40th anniversary as a guitarist, he is currently on record with the electronics constellation Le Beast Concrète. Collaborating partner here is the producer and beat maker David Sisko.
- I have known David for years, but something mysterious drove us together during the pandemic, says Lucas about the resulting "Gargoyle".
- We wanted to make an album that sounded like science fiction. We wanted to create a shining vision of a better future.
When Lucas invites you to an anniversary concert in his hometown of New York next month, Sonic Youth's counterpart Thurston Moore is among the announced guest artists.
—Emil Mohr

FROM BEEFHEART.COM:
Gary continues to surprise! You never quite know what he's going to do next...but you always know that it's going to be interesting.
His latest adventure—entitled Le Beast Concrete—sees him join forces with David Sisko, an NYC based producer, mixer and remixer to produce some startling and intense soundscapes. Gary's incendiary guitar forms the centre around which swirl the electronics, beats and rhythms conjured up by David.
In the press release it's described as "combining the elements of the past, present and the near future, it can be considered a "genre-fluid" mix blues, rock, dance, trap & the avant-garde—like none other before"...which is about right!
The full album, Gargoyle, will be released 11th August 2021 on Arena 01 Records through ONE rpm.
As a taster a single is available on streaming channels. Most of the album tracks are instrumental so Realize it with a vocal sample by Lil Woozy is slightly different but is still a fine introduction to this new music.
—Steve Froy

FROM ARTE SONORA (PORTUGAL):
“Gargoyle,” Le Beast Concrète's debut album, has arrived, bringing together legendary guitarist Gary Lucas and New York producer David Sisko.
“Gargoyle”, released today, August 13, “is a real experience that challenges the concept of gender”. There are eight tracks that fit blues, rock, dance music, trap, avant-garde and a variety of influences that inhabit the imagination of Le Beast Concrète.
In the year that celebrates 40 years of career, Gary Lucas proves once again that there is still a lot to do. Legendary guitarist (Captain Beefheart, Gods and Monsters) has teamed up with New York producer David Sisko on a cross-genre project. Le Beast Concrète combines Lucas' guitar with Sisko's synthesizers and beats and the result is a “genre-fluid” sound that takes shape in “Gargoyle”, the debut album already available on the main digital platforms.
New York, the urban jungle where they both live and work, was the inspiration for Le Beast Concrète, but it wasn't the only one. The concept of “musique concrète” – a compositional technique used in the duo's creative process – and their mutual fascination with the “mythical creatures” of cinema and literature are reflected in the project's title and in the eight themes that make up “Gargoyle”. “Realize It,” the duo's first track released in early July, combines Gary Lucas' signature riffs with Sisko's catchy 808 deep-trap beat and features Lil Woozy. The sample – “There’s no wrong or right. And realize it” – repeated like a mantra, is “a symbol of the times we live in, in which we are bombarded all the time with morally and ethically ambiguous messages. Realizing this is the first step towards moving forward», explain the mentors of Le Beast Concrète.
This was followed by “Dunny Rat Boy”, a second single full of film-noir, dance, trance, psychedelic-acid rock and blues references and which «is a good sample of what we can find in the album that has just arrived: an extravagant cocktail of influences and a sound and visual experience that combines elements from the past, present and future like few others.
"Gargoyle" arrives through Kobalt Music / Gary Lucas Music (BMI) and Endless Mind Passivity Music (BMI).

FROM OOR MAGAZINE (NETHERLANDS):
The extraordinary guitarist Gary Lucas (Captain Beefheart, Gods and Monsters) is a busy bee.
Already for more than a year he gives weekly a couple of mini-concerts on FaceBook from his apartment in New York.
Despite the very strict corona- rules in the USA he managed last year suddenly to show up in Maastricht for a special project with the young and acclaimed bassist Peter Willems.
Recordings of this appear end of this year, but first he surprises with a brand new album, made with the New York producer/mixer David Sisko, by the alias Le Beast Concrète.
On this mainly instrumental album Lucas plays his many guitars and Sisko takes care of the electronics. Usually it runs on almost all Gary Lucas albums to the master guitarist himself.
However, this is clearly a duo that plays together. Sisko even delivers beats, you rarely hear with Lucas.
Because of this, for example Mad Above becomes a dance-track in which Lucas has a serving role. In Cool Hand Luke you hear the drum beats as support of his finger-picking play.
The quiet Brooklyn Cat sounds Durutti Column-like.
Also the closing, dreamy and symphonic Once Upon A Time is downtempo, with a corresponding videoclip build with fairytales images.
GARGOYLE is an impressive album, showing multidimensional qualities of the guitarist Gary Lucas in many different ways.
—OSCAR SMIT 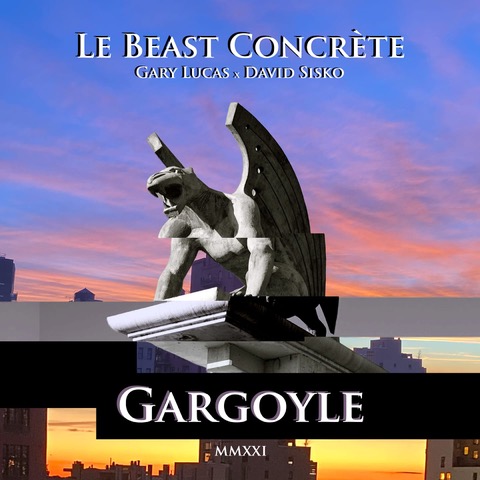 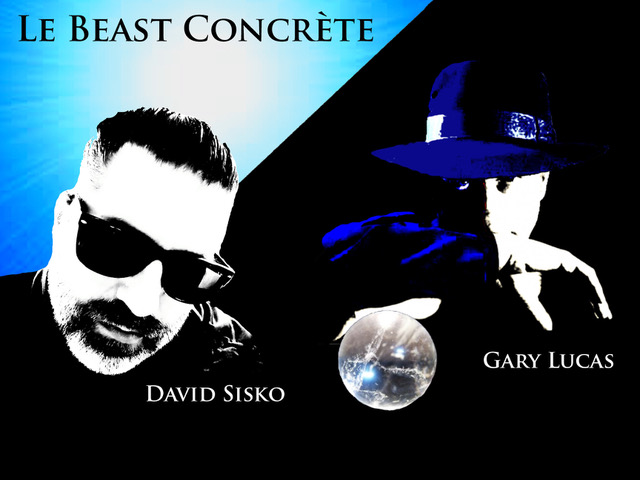 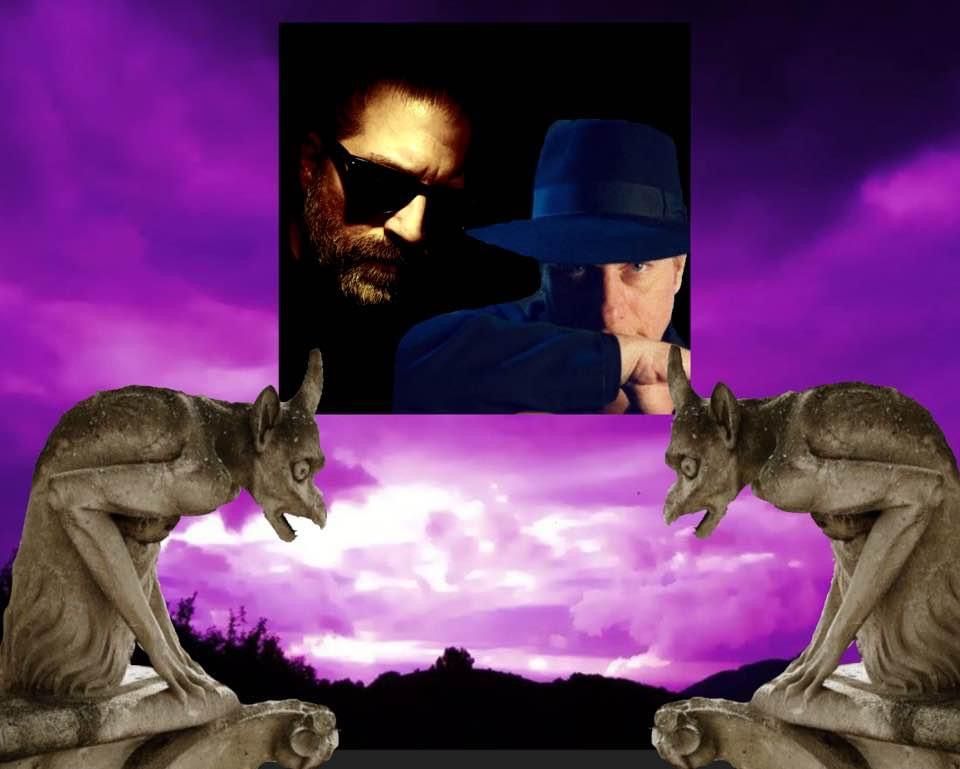 
LBC's third single "Once Upon a Time", with a clip by Dave Pearson: