Reminiscence by Gary of his father Murray Lucas in honor of Father's Day, June 21, 2020

My father Murray was a good man, a loving father to me and my three siblings and extremely devoted to my Mom. A free-thinker and very liberal guy, he possessed an early Shakespeare and Company pirated edition of "Ulysses" printed in Paris, which he liberated from the Zeta Beta Tau fraternity house at Syracuse University when he was an undergrad there. He took me to see Elio Petri's black science fiction erotic comedy "The Tenth Victim" in 1965 at the Westcott Theater because it was rated X and you needed to be accompanied by an Adult to get in. He came to me out of the blue one day when I was a clue-less 9 year old and said "Why don't you take up a musical instrument—how about the guitar?"—so you have him to thank or curse depending on how you feel about my playing. He paid for 4 years of college plus shipping and handling which in those days was a staggering 20k in tuition alone. He warned me when I left my day-job to pursue music full-time at the ripe old age of 38: "If you want to be an artist, you should be starving in a garret!" He bought me a Stratocaster for my bar-mitzvah. He let me smoke pot in the house when I was in high-school rather than risk getting busted outside, and allowed me to bring my girlfriend home to sleep over when I was in college. He hated pompous politicians and bureaucratic red tape. He imported and distributed all sorts of housewares—Weber cookers, Oneida flatware, and tchotchkes like miniature Sony Trinitrons, Braun personal fans, even Lava Lamps for a time. He opened up Asia for me once he got the hang of importing and we had adventures together there I won't get into here, let's just say they were kind of unusual and not your typical father-son hi jinx. He grew his hair long in the back when he was older and women (not just my Mom) adored him, he was a real charmer. Smart as a whip, he was a certified CPA before self-starting his own distribution company in the 50's. He and my Mom took me and Don Van Vliet out to brunch once in NYC and then Don gifted them with the drawing below now in my possession. Don loved that my Dad's name was "Murray" (misspelled below), he rolled it over and over on his tongue a few times with relish (Danny Fields and I have a running joke that many Jewish men's first names derive from aristocratic British surnames—think Seymour, Irving, and Murray). I really miss him to this day and bought an electric yahrzeit candle in Amsterdam at the Jewish Museum right after he died which burned for many years at the foot of my bed as a nightlight before it gave up the ghost. He died 11 years ago and I played "Our Love is Here to Stay" at his memorial ceremony in Riverside, CA. I owe him and my Mom, who recently died of the virus, so much. I Love You Dad. 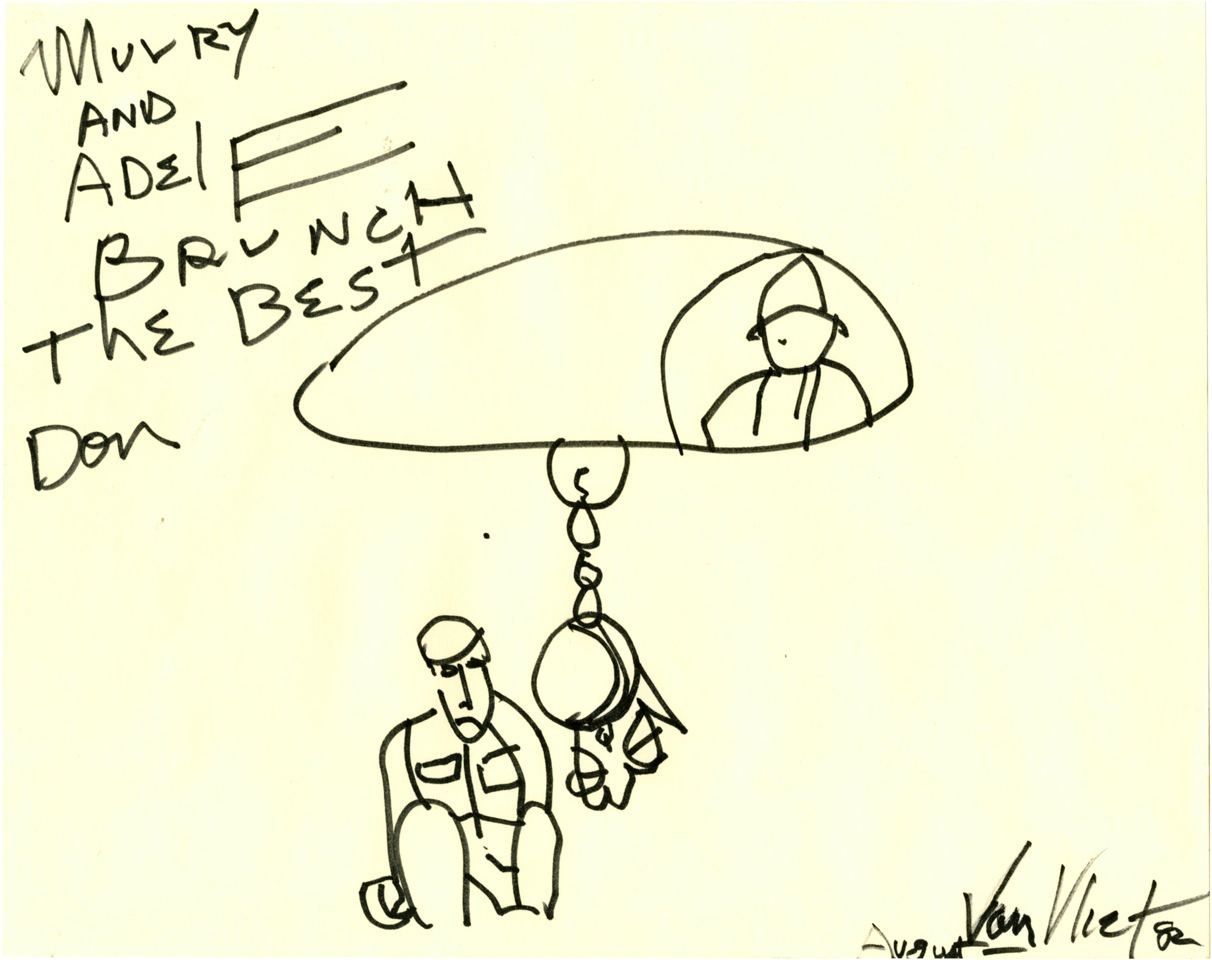 "Reflection in a Taxi Mirror"