In spring of '77 I'd just moved to NYC after lamming it here from Taiwan via San Francisco, where I'd married my Singaporean girlfriend Ling. Later that summer our friend Gopal Sukhu—a Black intellectual who spoke fluent Mandarin and played classical guitar, then working for filmmaker extraordinaire D.A. Pennebaker—invited us after-hours for a private screening in Penny's office. On the bill were several films featuring Norman Mailer. I'd had a particular fascination with his writing in my youth, his renegade intellect spoke directly to my own rebel heart, he'd been an anti-hero of mine since junior high—so I was delighted to finally get to see his legendary self-directed "Maidstone", shot by Pennebaker. Next on the bill was a cinema vérité account of an extraordinary Mailer-dominated event from 1971 which had recently been completed by director Chris Hegedus in the form of a hand-held and breathless you-are-there type documentary entitled "Town Bloody Hall". The event in question was a public forum hosted by NYC's Theater of Ideas devoted to a discussion of the emerging Feminist movement, and was basically billed back in the day as "Norman Mailer vs. the Feminists". Mailer had recently been attacked by Kate Millett in her book "Sexual Politics" for his patronizing portrayal of women in his novels and short stories (check especially "An American Dream" and "The Time of Her Time")—and he'd responded with his own take on the Battle of the Sexes in a lengthy essay entitled "The Prisoner of Sex", which took up a full issue of Harper's Magazine. The 4-women panel moderated by Mailer included the Village Voice's Dance Critic Jill Johnston (later a West Village neighbor and friend); Australian firebrand Germaine Greer, then in town to promote her provocative book "The Female Eunuch"; Columbia University professor and critic Diana Trilling, and Jacqueline Ceballos, the then president of NOW (the National Organization of Women). In the audience that night was a concatenation of prominent New Yawk intellectuals including Susan Sontag, Anatole Broyard, Cynthia Ozick, and Betty Friedan. What a set-up!! And what a fantastic evening. I found the film vastly entertaining and hilarious—let the games begin!! Mailer gives as good as he gets throughout—and he gets it a'plenty from Greer, Johnston and Ceballos, as well as from various hecklers in the audience (Mailer partisan Diana Trilling rallies to his defense). It's explosive, rip-roaring fun, with a spirit of Riot hovering over the proceedings. You are never going to see anything like this again in these dis-United States (bring back those NYC Nights). The only recent public debate I recall as being as outrageous would be Christopher Hitchens vs. "Gorgeous" George Galloway a few years ago. The intellectual sparring throughout here is superb, with volley after volley of priceless ripostes and put-downs traded by Mailer and Greer particularly roiling the boards (and you thought Jacob Rees-Mogg was a bitch)—plus there's some side-show-and-tell hijinx when Jill Johnston, after reading her Gertrude Stein-esque peroration, breaks the fourth wall and gets down and dirty rolling on the stage floor with two female companions, while a visibly disconcerted Mailer sputters: "Jill, Jill...be a lady, Jill!" This doc. got a theatrical release in 1979, and was broadcast the next year on PBS here in NYC only (the other PBS national affiliates didn't think it would be of interest!). I taped it on VHS back then and enjoyed it immensely over the years. In fact, many priceless moments of this debate (basically an updated bear-baiting ritual, with Mailer as Ursus Major) are permanently burned in my brain. Now the Criterion Collection have released an excellent restored Blu-Ray of the film with lots of juicy extras, including a fascinating interview with the still-cantankerous and always compelling Germaine Greer (who once posed topless with the Bonzo Dog Band's Vivian Stanshall for the cover of OZ Magazine's Groupies issue). The sexual tension between Germaine Greer and Norman Mailer alone is worth the price of admisssion. One of the best documentaries ever—you need to see this!! 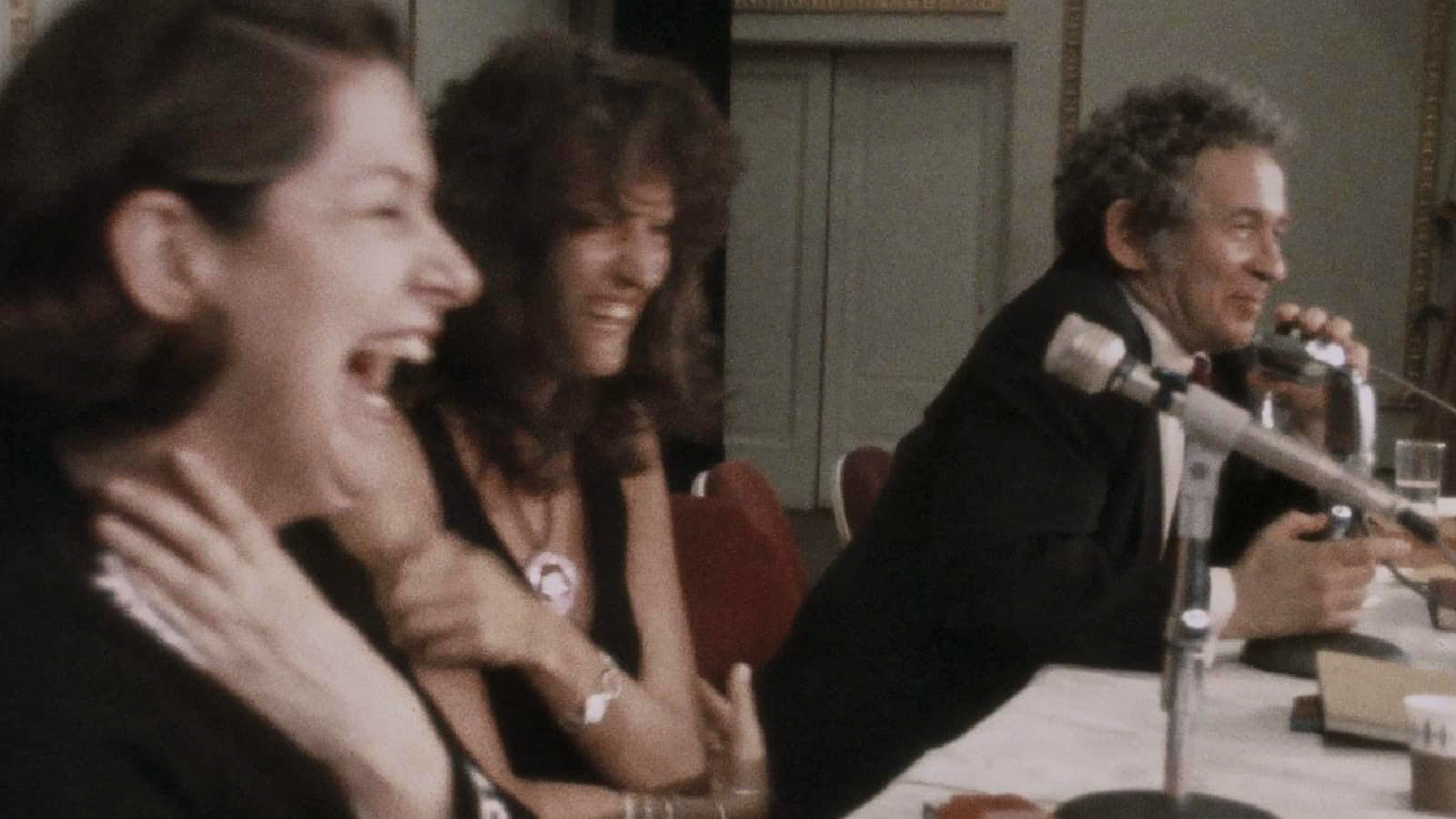